If you are passionate about cycling, it is a continuous mission to discover the best cycling races to go to all over the world.

Although professional road cycling is not a huge sport in the United States right now, it is still fascinating to watch. The races are gruelling to take part in and road cycling has become one of the most followed sports worldwide.

Lance Armstrong brought a lot of attention to professional cycling, both in the US and across the world, despite the issues surrounding him, so he deserves recognition for his influence.

Most cycling fans know about the Tour de France, but that’s about it.

There are a lot more cycling races around the world that are hugely popular and almost as iconic.

Let’s saddle up and take a look at some of the best cycling races worldwide. 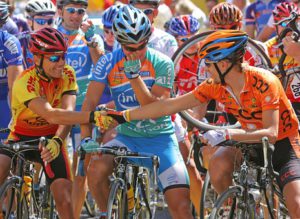 This is actually a newish race, having only been launched in 2006, but it certainly makes the most of the sheer magnificence of the Californian wilderness.

This is, without question, the most important and popular bike race in America at the moment, and it attracts all the big cycling teams.

It takes place over 8 days and 700 miles of some of the most beautiful scenery the United States has to offer, including vineyards, farmland, and an incredible coastline. If you want a picture-perfect cycling race to watch, this is definitely the to choose.

This is one of the most gruelling races because it is 185 miles long. This makes it the longest one-day race in professional cycling.

While the Tour de France is a marathon spread over several days, Milan-San Remo is about putting all your energy and ability into one day and making it count.

Long and flat, the course definitely favours sprinters. There are strong winds and unpredictable weather conditions to contend with, so it’s most definitely one of the most exciting races to both enter and .

We The Tour de France is an institution in global sport, and most cyclists aim to do this at some stage of their cycling career.

At 21 days and more than 2,000 miles, it is considered the pinnacle of competitive road cycling. It pits the best in the world against one another in an epic quest for cycling immortality.

Many of the most famous names in the sport have worn the famed yellow jersey, and this is the most-watched bike race in the world.

Spain is the perfect location for professional road cycling, as it is beautiful, and has wonderful weather.

Because this race happens late in the cycling season, it is most commonly overlooked by fans and doesn’t always feature the best riders.

However this is one of the most challenging races.

The intense heat and humidity mean riders must condition themselves perfectly, otherwise they will tire too quickly.

It’s definitely the most underrated of the grand tours, and well worth checking out.

Because I am proudly South African, I couldn’t leave this one out.

The Cape Argus Pick n Pay Cycle Tour may take riders through some of South Africa’s most spectacular scenery, but it’s still 100 kilometres of hard work.

Hollywood actor Matt Damon’s participation in the 2009 race lured many
hopefuls out onto the streets of Cape Town.

The Argus is as much about the cyclists as the spectators. and it is normally a huge event with over 25 000 cyclists taking part.

You can check out some pics here.