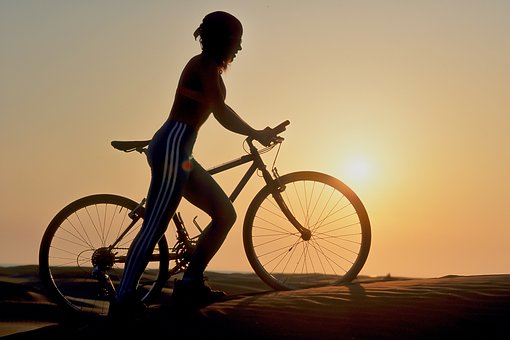 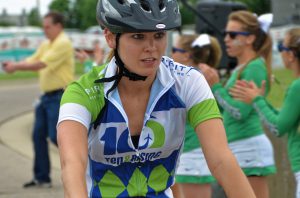 In this post, I am going to focus on cycling training for women and some cycling tips that women can relate to.

Cycling can be a wonderful form of exercise. Riding along a path, road or trail can be an addictive, almost out-of-body experience, but a badly set up bike, the wrong training or even the wrong clothing can make things uncomfortable.

Here are some essential cycling tips especially for women. This is especially important when women start building up towards longer rides. It is important to try and avoid the two most common sources of discomfort namely saddle burn and pain in your neck and shoulders.

Make sure to wear a good quality pair of cycling shorts and no underwear. Cycling shorts are the single most important piece of cycling clothing, even though they look a bit odd by normal standards.

Purchasing a good pair of cycling shorts will give you a far more comfortable ride. Here are a few examples of cycling shorts that can be purchased online. If you want further information, simply click on the pictures.

The pad on the inside of the short, known as a chamois, might not look like it will do much, but believe me, it makes a world of difference to the way your bum feels after the ride.

Resist the urge to wear undies beneath your cycling shorts, unless they are specially designed ones like the ones above. This is a major no-no. The chamois is a technical piece of equipment, and it needs to be against your skin to do its job properly.

Underwear can cause chafing and you don’t want to end up having to walk like a cowboy.

Get your bike and saddle professionally fitted to suit you.

Because ladies have a different pelvic structure to men, because of the miracle of childbirth, it also results in the center of gravity being more in the lower back.

Men carry their center of gravity up higher in the torso. If you ride in the same position on a bike as a man, then you are most likely going to suffer from neck and shoulder pain.

Fortunately, resolving neck and shoulder pain is not difficult to do, providing you get a qualified bike fitter to assess your position on a bike.  This will help you eliminate the discomfort that most women suffer much more than men.

Even your saddle can be custom fitted to suit you.

If you follow these two rules, cycling will become a lot more comfortable and thus enjoyable for you.

Now for some cycling myths.

People have always had opinions and thoughts regarding cycling training for women, and while some opinions like cycling helping in the advancement of women are true, there are many that are also not so true.

As far as I can see, this isn’t even a thing. In the past people would say that the wind passing rapidly through a woman’s mouth would cause the erosion of teeth and gums, thus giving the woman a ‘bicycle face.’

This is one cycling myth you can put to bed.

While it is wonderful that many bike companies have lines of bicycles, gear, and clothes designed with female athletes in mind, don’t make the mistake of only considering women-specific products.

You may be missing out on the best thing for you. While it is important to get professionally fitted with a bike and saddle, there will invariably always be something that is better for you in the male range. This is a personal choice, and if you only look at the women’s side of the aisle, you may miss out on something truly great that you could use that was made specifically for men.

Believe it or not, there are some women who do better with a men’s saddle, as everyone is shaped differently.

Women Aren’t As Tough As Men

I don’t believe this cycling myth for one minute. After all aren’t women the ones dealing with childbirth. After all, they willingly sign up for this, so why not cycling as a sport?

Some people love to judge, especially when they see a pregnant woman on a bicycle. 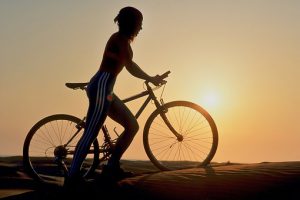 As long as she has been given the go-ahead by her doctor and she is already an experienced cyclist, why not?

As long as one is not partaking in extreme and dangerous cycling sports, the exercise will be good for both mother and child.

Accidents, of course, do happen, but it is no less risky to climb into a car. Car accidents each year far exceed bike crashes.

Here are some tips on avoiding injury.

This cycling myth is simply untrue.

People who argue that women’s racing isn’t worth watching typically focus on the speed of men’s racing and claim that the men are better athletes, as they are generally stronger, fitter and faster.

Does this make them more worthy of the attention?

Remember that bike racing is a tactical game, and the fittest or the fastest person doesn’t always win, so saying that men’s racing is more fun because the athletes are fitter just doesn’t make any sense.

One of the things that make women’s cycling really great to watch is that the races are normally short and too short for the fitness level of most of the professional cyclists. That means that they attack and go on the offense from the first kilometer.

Men’s racing like the Tour de France is long and there are many stages where not much happens. It is simply watching a bunch of cyclists cover kilometers.

Changes in hormones in the monthly cycle of women can impact on their performance, but not in the way you might think.

In fact, it is said that that the days where your hormones peak are the hardest days for doing cycling training for women, and this is just before your period starts.

But we all know that women are strong and they get through this just as well as any man.

Well, I have seen all shapes and sizes of legs, but most of the professional cyclists have well-formed legs that most of us would love to have ourselves. Cycling training for women will give you lovely legs.

Strong legs are awesome to have, and yes working your leg muscles can lead to increased strength and therefore increased muscle size.

In fact, a 2004 Harvard University study followed more than 18,000 women for 16 years and found those that cycled for four hours a week were 26 percent less likely to gain weight over the 16-year period.

The other groups, meanwhile, gained an average of 10 kilograms over the same timespan. Bottom line? Yes, you may gain some muscle, but overall you’ll end up slimmer and more powerful in the long run.

So there goes my take on cycling myths for women. If you have anything to add to cycling training for women, I would appreciate your comments below.